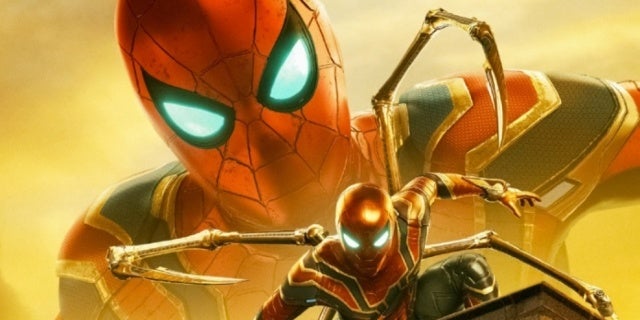 At Midtown High, Peter tells best friend Ned (Jacob Batalon) he’s going to take down the Manfredi crime family. Ned asks if he needs “some guy in the chair help,” but Peter’s got it.

Cutting to a Post Office, Peter is stuck in a long, unmoving line. A quick glance around and a button press later, Peter’s phone activates a Spider-Bot tucked away in his backpack. The briefest, most silent of flights later, the drone sneaks under a partition. Its metallic appendage presses a button, switching the nearest pickup window from “closed” to “open.”

At Delmar’s Deli-Grocery, Peter scoops up some last-minute vacation essentials. “You planning a trip?” asks Mr. Delmar (Hemky Madera). When he finds out Peter is headed to Europe, he asks, “Can I come?”

“It’s a science trip,” Peter says. “The history of science, Tesla, Da Vinci and all that.”

“I’m good,” Delmar quips. In fumbled Spanish, Peter asks for a dual headphone adapter and gets it. “Your Spanish needs some work,” Delmar says.

At a pawn shop, Peter plunks down a shoebox stuffed with old school He-Man, ThunderCats and Star Wars action figures. When the clerk asks if he’s “sure about that,” Peter says he wants to buy crush MJ (Zendaya) “something really nice.”

“Well, I hope she’s worth it,” the clerk says as he cradles a Lobot action figure from Return of the Jedi.

“Actually, can I keep the Lobot?” Peter asks, reclaiming the cyborg toy before finishing the question. “Thanks, yeah. I’ll keep that one.”

Smash cut to what is usually an upscale restaurant. Webbed up thugs drop onto tables as Spider-Man, suited in his glowy-eyed Iron Spider suit, flips into action. “Let’s keep it moving, guys,” Spidey says as charged web blasts explode, turning gun-wielding thugs into wall decorations. “I got a lot to do today!”

Spider-Man zips and zooms around the room. A fluid multi-move takedown ends with Spider-Man sat on an overturned table. “Alright, I’m gonna give this place one star,” he quips.

Sat on an overturned table, Spider-Man is lit up by another Manfredi thug with a machine gun. While the thug takes the time to reload, the collapsed Spider-Man pops up like an uncoiled spring: “Just kidding! It’s bullet proof.”

Spider-Man is rushed by multiple thugs, each using whatever they can get their hands on as weapons. Spidey’s takedowns are assisted by the mechanical arms now sprung from his back, each moving with a mind of their own. “That’s it,” Spidey says, another job well done. “I’m definitely not giving you a 20% tip.”

When the police arrive, they find the webbed up Manfredi family hanging like human chandeliers. After some playful banter with the police, Spidey declares he’s now on vacation.

The action sequence was “in the movie for a while” and “just ended up not being necessary to the flow of the movie,” director Jon Watts previously told io9. The dropped sequence reinserted into the extended cut will be included as a short film as part of the special features found on the blockbuster’s home release.