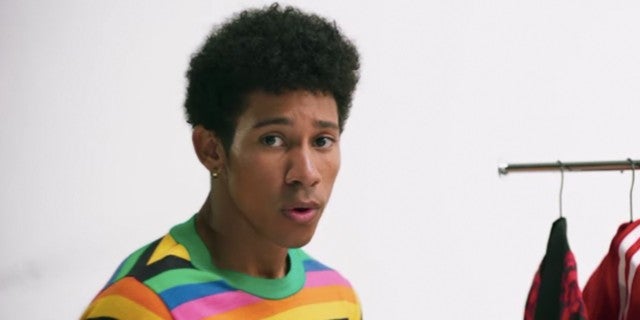 The new season of The Flash is almost here, and a lot of Team Flash will be in tow headed into “Crisis on Infinite Earths.” One member of the team that fans want to see back for next season is Wally West. The young speedster stepped away from the show early last year. Keiynan Lonsdale decided to address the decision to quit the show on a new song called Rainbow Dragon.

The video sees Lonsdale progress through a number of colorful looks as he tells his story in his own way. The actor even points to some of the awards the show has won in the video as he talks about his process for deciding to step away. Rainbow Dragon’s visual really is uplifting, and the tone of the instrumental is nothing short of empowering.

Lionsdale’s second verse even addresses him leaving The Flash in detail, “Oh damn, well honestly / TV’s cool but a bore / Left it in a dash (yah) / Had it all, wanted more / Took it to the max (yah) / All them bullies made me strong / While they talking trash / Now I’m God & I show em how to make it clap / I realised I could eat some a** if I wanted to / I could smoke some grass if I wanted to / I could quit the Flash if i wanted to / Anything & everything is up to you / And that’s the truth but you be making up that it’s impossible cause you’ll be so uncomfortable but that’s okay cause you didn’t know but now you know so…”

Lonsdale is breaking some records in the honesty department, but honestly, he wears all of those admissions well. He’s always been a free spirit and this video just shows off all the different sides of himself. All that confidence has paid off as his roles in Love, Simon show. But, now could he decided to put on his tights again and help Barry face the biggest threat in the show to date?

Last year he left the fans with this message on social media, “Yo! Soo as a lot of you have now read, I’m not returning next season as a series regular for The Flash or Legends. It’s definitely not a total goodbye or ‘see ya never’ situation, cause Wally West will still be around when you need him the most! 🙂 It’s just that it won’t be full time anymore.”

If there was ever going to be a time for a return, now would be a pretty great time for Team Flash. The Flash and DC’s Legends of Tomorrow will return for new seasons on The CW in the fall.