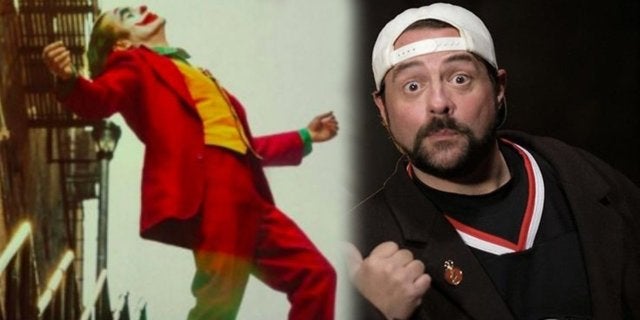 Joker is the talk of the Internet this week after some new posters and a new trailer for the film surfaced. Fans all over the web are loving how the new movie looks, and that includes Kevin Smith. The director took to Twitter to express his excitement about Joker and how different it looks compared to some of the other comic book movies that have seen release lately.

Smith’s tweet pointed to the fact that the film looks like it could stand on its own without the ties to the Joker character. He also made reference to the main characters from Taxi Driver and The King of Comedy. It is really hard to deny the vibe of those two films in the footage fans have seen so far. The finished product should be quite the ride if the movie can keep up the momentum presented in these trailers.

WOW! Looks like the @jokermovie would still work even if @DCComics didn’t exist (aside from the Joker coming from there). Least comic-book-looking comic book movie ever marketed to a mass audience and I’m here for it! The Joker as both Travis Bickle and Rupert Pupkin is sublime! https://t.co/Wn7172sXtK

Joaquin Phoenix is also ecstatic about the role, and he’s taken every opportunity to talk about the film and what will seperate Joker from all the other comic book fare from this year. This new movie might be based on the most popular villain in DC’s entire lineup, but Phoenix argues that this film will stand out from other entries in the superhero genre. He’s even willing to extend that past the superhero genre.

“I wouldn’t quite classify this as like any genre,” Phoenix said in an interview last year. “I wouldn’t say it’s a superhero movie, or a studio movie or a … It feels unique, and I think more then anything, and probably the most important thing, is Todd [Phillips] seems very passionate about it and very giving, and so that’s exciting. I think, underneath the excitement of these films, and the size of them, there are these incredible characters that are dealing with real life struggles. And sometimes that is uncovered and exposed, and sometimes it isn’t, and so I always felt, like, there were characters in comics that were really interesting and deserve the opportunity to be kind of studied. And so I think that’s what Todd sees appealing about this idea.”

Award buzz has already begun for the film with many who have seen early bits of Joker heralding Joaquin Phoenix‘s performance. Venice Film Festival artistic chief Alberto Barbera told Variety just how impressive the film was earlier this year. He said, “I have to say, Warners was convinced pretty rapidly, because it’s a really surprising film,” he continued. “It’s the most surprising film we’ve got this year…This one’s going straight to the Oscars even though it’s gritty, dark, violent. It has amazing ambition and scope.”