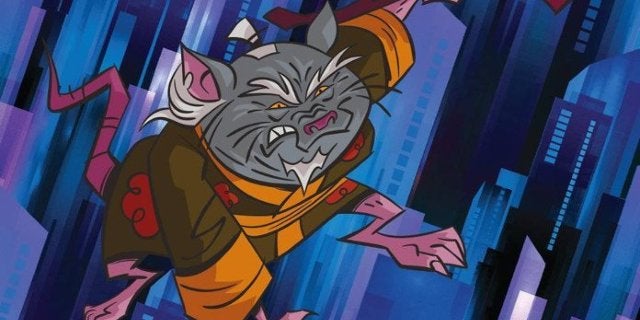 Their father and mentor, Splinter, is no different. Without an archenemy to worry about, he’s been letting himself go and not focusing on training the Turtles. He also has a different origin story than previous versions of the character. Speaking to ComicBook.com at San Diego Comic-Con, co-creator Andy Suriano says they always knew their take on Splinter would be divisive.

“We knew we were going to split a lot of people at the beginning of season one with how we are handling Splinter,” Suriano says. “But we knew where we were going with him, and where we are going to take him, and I think, especially where he’s going, is so awesome.”

In most versions of the Teenage Mutant Ninja Turtles, Splinter is somehow related to Hamato Yoshi, a martial arts master and rival to Oroku Saki, the Shredder. That’s not the case in Rise of the Teenage Mutant Ninja Turtles. Instead, this Splinter is Lou Jitsu, a descendant of the group that once defeated the Foot Clan and the Shredder. He used his skill in martial arts to become a famous movie star.

The villain Baron Draxum use Liu Jitsu’s DNA to mutate the Turtles, hoping to begin raising an unstoppable mutant army. This makes Splinter the Turtles’ biological father in Rise of the Teenage Mutant Ninja Turtles. When Liu Jitsu learned what was happening, he escaped with the Turtles. At some point, he was mutated into a rat and began going by the name Splinter and raising the Turtles as his children.

In the first season of Rise of the Teenage Mutant Ninja Turtles, Splinter learns that the Foot Clan has returned and could bring back the Shredder. He realizes he has been lax in his duties, both in his own training and training his sons for the battle to come. Learning that the Foot and the Shredder are real and a present danger changes his attitude going forward.

What do you think of the Rise fo the Teenage Mutant Ninja Turtles version of Splinter? Let us know in the comments.

John Cena Says the Beginning of The Suicide Squad Is Like Its Own Movie
Hasbro Shows Off New BLACK WIDOW, TASKMASTER Toys
Hal Jordan (Green Lantern) Origins | Comicstorian
A New Class of Teen Mutants Shakes Up DAWN OF X in CHILDREN OF THE ATOM
WHOOPIE GOLDBERG Agrees to Return as GUINAN For STAR TREK: PICARD Season 2