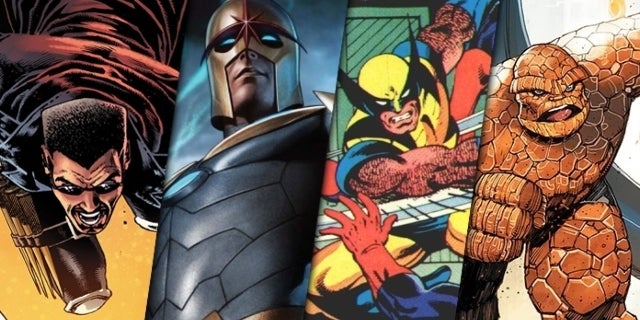 It hasn’t been but a month since fans were treated to Marvel’s massive Phase 4 reveal, a slate that includes nearly a dozen properties from Marvel Studios for both film and television. From next year’s Black Widow and The Eternals to 2021’s Thor: Love and Thunder, all bases are covered for most fans.

But then the stars have aligned to give fans the D23 Expo, another potential big-time opportunity for more reveals from Marvel Studios. The biennial Disney-owned expo is going to be a big launching point for Disney’s own streaming platform and with all things under one roof, it stands to reason Kevin Feige and his team at Marvel Studios has something up their sleeves when it comes to some additional announcements.

While we’re not sure if they’d go the length to go all-out and drop a massive Phase 5 slate reveal — not unlike what they did at San Diego Comic-Con — we’re hoping that’s the case. In fact, we’ve cobbled together the ultimate wishlist of films we think would make sense for movies in 2022 and 2023.

Keep on scrolling to see what properties we think would make a solid case for Phase 5. Let us know what you hope to see in the comments below or by tweeting me at @AdamBarnhardt to chat all things MCU!

One of the biggest surprises in the ten-year history of the Marvel Cinematic Universe, we know the Mahershala Ali-starring Blade isn’t going to be in Marvel’s Phase 4. After Marvel’s Hall H panel, Feige confirmed with members of the media that Blade isn’t expected to be a part of Phase 4 — after all, it didn’t receive a release date.

Since the property doesn’t have a writer or director attached as of yet, 2022 is the earliest we’ll ever get the film. In fact, with some other movies already pretty deep in development, it’s looking more likely 2023 will be the year Blade hits theaters, with an outside shot of debuting sometime later.

Either way, there’s nothing saying we won’t see Ali as the Daywalker earlier. After all, Doctor Strange in the Multiverse of Madness is being described as Marvel’s first “scary movie” and at some point throughout the multiversal travels, perhaps Doctor Strange (Benedict Cumberbatch) and Scarlet Witch (Elizabeth Olsen) come across Blade and vampires.

The first film on this list guaranteed to be in Marvel’s Phase 5 is undeniably James Gunn’s Guardians of the Galaxy Vol. 3. It’s been in development hell for a moment thanks to some temporary changes to staffing and the film that was likely going to hit theaters in 2020 is now pushed back indefinitely.

At this point, the film will likely begin production in Q3 or Q4 2020 for a 2022 release — though that’s pure speculation. Marvel has a a May date in 2022 (May 6th) and with no Avengers team-up film in sight, it’s very possible the third Guardians film is something that could into that summer blockbuster slot.

Finally confirmed by Feige at Comic-Con, Captain Marvel 2 is another likely Phase 5 candidate. Not counting Marvel Studios’ Phase 1 films, the production house has welcomed back most filmmakers should they choose to return to direct follow-ups. That means Anna Boden and Ryan Fleck or more than likely set to return, especially since the first Captain Marvel shattered all box office expectations.

Gee dang it, can we get a Nova movie yet? At one point or another, it’s inevitable the character will join the Marvel Cinematic Universe. Maybe he’s already penciled in the Guardians 3 script or as a supporting character in Captain Marvel 2. Either way, there’s a massive story to be told in the reconstruction of Xandar and the creation of a stronger Nova Corps and the Worldmind — a story that’d be perfect for the silver screen.

Another movie all but guaranteed to be a part of Marvel’s Phase 5 is Black Panther 2. In fact, filmmaker Ryan Coogler has already started the treatment on the film. Since Gunn will be busy filming The Suicide Squad for a while, it’s likely the Black Panther sequel will end up coming before it in the first slot in 2022.

While bigger movies might typically be reserved for summer slots, the first Black Panther film had no problem making money in its February 2018 slot — in fact, it ended up making $1.35 billion worldwide with a February 16th premiere date. If it trends like previous Marvel movies — or any sequels for that matter — it’s completely reasonable the follow-up will end up topping out somewhere north of $1.5b.

Though we’re not holding our breath on this one, it’s more likely than not Fantastic Four will be the first film Marvel Studios develops based on the properties once owned by 20th Century Fox. With Dark Phoenix finishing with an abysmal box office and one Disney exec blaming it for putrid Q3 earnings, Marvel’s likely all-in on the First Family.

Sure, we got Fant4stic 2015 but by the time 2023 or so rolls around, more than enough time will have passed for fans to forget the Josh Trank film. After all, Hollywood reboots movies after a couple of years anyways, right?

But Adam, just a few moments ago you said Marvel Studios wasn’t in a rush to develop an X-Men movie! Well, maybe not the X-Men proper — but there are plenty of other characters involved in that franchise they could work on properties with.

Yeah, fans are going to want to see Wolverine, Jean Grey, and Cyclops join the Marvel Cinematic Universe — but we’ve already seen that several times in the past two decades. Though those three are locks to join the MCU at some point, perhaps Marvel Studios will elect to dive into the Shi’ar or Starjammers. Hell, maybe even the first “X-Men” property we’d see on the silverscreen would be an Imperial Guard vs. Starjammers-type set-up…Captain America: Civil War, but in space.

This Wild Cyberpunk 2077 PS1 Demake Was Made Entirely Within Dreams
Oscars 2020: Complete List of Nominations
Star Wars: Nien Nunb Actor Claims There’s “Not a Single Piece of Evidence” His Character Died
Stephen King Under Fire For Tweets About Diversity At The Oscars
The Walking Dead’s Chandler Riggs Wipes Out When Snowboarding After Horse-Related Injury