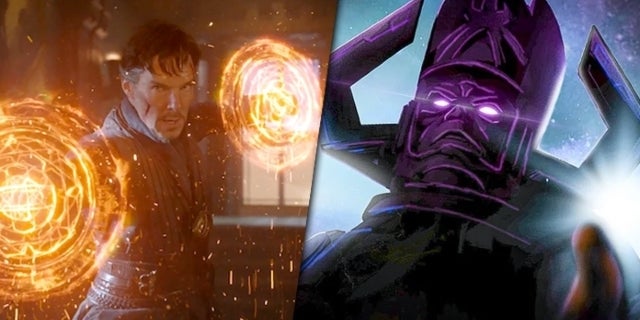 You’re thinking it and we’re thinking it: it’s time for Galactus to arrive in the Marvel Cinematic Universe. At long last, The Walt Disney Company and Marvel Studios own the live-action film and television rights to the Fantastic Four, including big-time villains likes Galactus. Despite traditionally fighting Marvel’s First Family, it makes the most sense — at least at this point in time — to introduce the world-eating baddie in Doctor Strange in the Multiverse of Madness.

But why in a Strange sequel? We’ve already gotten one massive threat in the franchise in the form of Dormammu, so it’s not something fans would be totally shocked to see. Plus, add in the fact that both Strange (Benedict Cumberbatch) and Scarlet Witch (Elizabeth Olsen) will be going on an interdimensional road trip in what’s being billed as Marvel’s first “scary” movie.

Before we get much further, we should say we’re not pitching the idea of Galactus being a full-on antagonist of the Doctor Strange sequel. Rather, it’d make more sense to either tease the character in a brief fight during the interdimensional travels or a post-credits scene of some sorts. The Doctor Strange franchise is Marvel’s free pass at introducing large ideas and the world-eater would fit right at home.

Just imagine — Strange and Scarlet Witch manage to take down Nightmare or whoever the main Multiverse of Madness antagonist will be. They sling ring back into the Sanctum Sanctorum, but something else manages to come through. They hear a cling on the ground and turn around to a silver surfboard laying on the ground. Gnarly, right? At the very least — maybe use it as the basis for your next fanfic.

Then the question of a timeline comes into play. Doctor Strange in the Multiverse of Madness will fill Marvel’s summer blockbuster slot in 2021 and some reports have suggested that Fantastic Four would be one of the films Marvel has reserved in 2022. If that’s really the case, a Galactus tease in Doctor Strange 2 makes even more sense.

How do you think Marvel Studios should introduce Galactus to the Marvel Cinematic Universe? Share your thoughts in the comments or by tweeting me at @AdamBarnhardt to chat all things MCU! Doctor Strange in the Multiverse of Madness bows May 7, 2021.