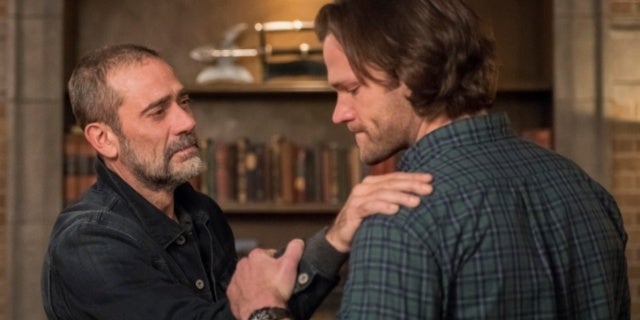 Asked at the Television Critics Association press tour if an offer has gone out to Morgan for a final season return, star Jared Padalecki said that was an inquiry for “the upper deck.”

“He had a fairly wonderful exit from the universe in his last appearance,” Ross-Leming said. “I mean, I think it would be really hard to top that episode in terms of the family continuity and emotions. And I think he sort of made his mark the last season, myself.”

In “Lebanon,” a wish from son Dean (Jensen Ackles) brings a still-living John forward from 2003 to 2019, where he’s reunited with his two sons and resurrected wife Mary (Samantha Smith).

The family reunion is cut short when the Winchesters realize John’s presence in the future is adversely affecting the timeline, and the destruction of the same treasure that made John’s comeback possible ultimately returns him to the past.

Morgan in January said he was hopeful Supernatural would include him in its 15th and final season.

”Hopefully they’ll leave it in a place where John could come back again,” Morgan told EW. “My dream would be to come back and do something in the last year, the last episode, the last couple episodes, whatever, and do a proper little arc.”

Stepping back into John’s shoes across a two-day shoot left Morgan longing for more, the Walking Dead star added, and it would be “fun to have some time and really dig in.”

”Maybe [episode 300] won’t be the end of John,” Morgan said. ”Like I always say to everybody: ‘It’s Supernatural, anything can happen.’”

When addressing news of the series’ final season in a statement penned in March, executive producers Robert Singer and Andrew Dabb promised Season 15 would “give these characters that we love the send off they deserve.”

Morgan next returns as Negan in The Walking Dead Season 10, premiering Sunday, October 6 on AMC. Supernatural launches its final season Thursday, October 10 on The CW.