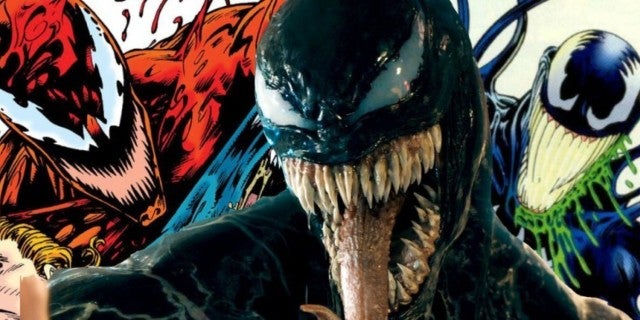 The final battle in the Spider-Man spinoff movie Venom ultimately featured to symbiotes battling over the fate of the world, and while Eddie Brock and his ally ultimately came out victorious, they were originally supposed square off against a foe who would have been much more satisfying for fans instead of saved for the post-credits scene.

According to newly surfaced concept art from DNeg senior concept artist Paolo Giandoso, the original plan for the final battle was supposed to see Venom facing off against the other iconic symbiote villain Carnage, but instead it seems like Sony Pictures is holding that conflict for the next film at least.

“Most of my contribution to Venom was to the third act. I was tasked with concepting the whole symbiote final fight, mechanics and all, the way the Venom and his evil counterpart clash together and merge, until the final sacrifice scene after the rocket explosion,” Giandoso wrote on his ArtStation profile. “It is my belief that when the element of time is dominant in a concept one picture is not enough. You simply cannot squeeze into a single frame the element of movement without making the image too crammed or making it look too bland.”

Now, it’s possible that the concept art was a placeholder for Riot, the symbiote that takes over Riz Ahmed’s character Dr. Carlton Drake. The two characters look very similar, with one having a smokey, blue-ish hue while Venom himself is starkly black. At least in the art work, the red color of Carnage gives the visual effects team a clear idea of the action beats as imagined in Giandoso’s concept art.

“I obviously have a close relationship with Woody,” Fleischer said. “And he’s one of my favorite actors, if not my favorite actor, and he’s just also an incredible human being. So, when we were thinking about including that scene and laying the groundwork for a potential sequel, he was the first person I thought of and a just because selfishly I’m really excited to work with him again, whether it’s in Zombieland 2 or the potential sequel to this film. But if you think about Natural Born Killers and Mickey, the character he played in that film, I feel like there’s a real lineage that you can trace from Mickey to Cletus and I also think that he hasn’t gone dark in that way for a while.”

Fleischer has since been replaced by Andy Serkis as the director of Venom 2, but it’s unlikely that the Marvel veteran would let that juicy villain slip by in the sequel.

Venom 2 is currently scheduled to release in theaters on October 2, 2020.