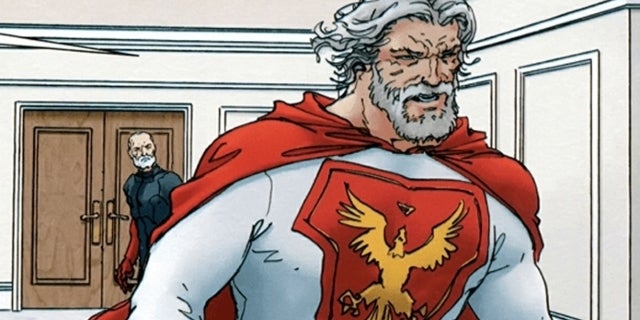 Photography on Netflix’s Jupiter’s Legacy has been underway since July and finally, the first batch of photos from the Toronto-based set has surfaced online, showing Josh Duhamel’s Sheldon Sampson in a surprisingly accurate look from the Mark Millar and Frank Quitely comics.

The photos show Sampson squaring up against a mysterious villain. The purple and yellow-clad outfit vaguely resembles that of George Hutchence/Skyfox, though the baddie is wearing heels. Another possibility could be Jess Salgueiro as Shockwave, a situation that may make more sense as Netflix officially announced the addition to the cast right around the time the set photos first leaked.

In addition to Duhamel and Salgueiro, other Jupiter’s Legacy cast members include Ben Daniels, Leslie Bibb, Elena Kampouris, Andrew Horton, Mike Wade, and Matt Lanter. The show will be one of Netflix’s first Millarworld offerings, the comic imprint previously owned by Millar and has since been purchased by the streaming giant.

The full synopsis for Jupiter’s Legacy can be seen below.

“A multi-generational American superhero epic, Jupiter’s Legacy follows the world’s first generation of superheroes who received their powers in the 1930’s. In present day they are the revered elder guard, but their superpowered children struggle to live up to the legendary feats of their parents. Steven S. DeKnight (Marvel’s Daredevil, Spartacus, Buffy the Vampire Slayer), who recently signed an overall deal with Netflix, will serve as showrunner and executive producer, with Lorenzo di Bonaventura and Dan McDermott also serving as executive producers for the series. DeKnight will also direct the first episode.”

What do you think of the first look of the show? Let us know your thoughts in the comments below or by tweeting me at @AdamBarnhardt!