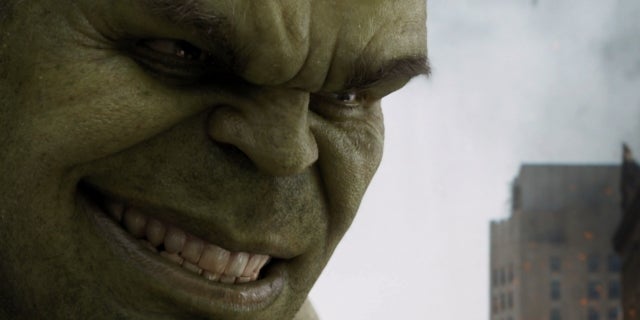 Bruce Banner/Hulk (Mark Ruffalo) had no shortage of entertaining moments in Avengers: Endgame, but it sounds like one of the most amusing ones was unplanned. During Endgame‘s recently-released commentary track, the film’s writers and directors spoke about the scene where some of the Avengers travel back in time to the Battle of New York, and “Smart Hulk” being unhappy with having to impersonate his former self. As it turns out, Banner’s reaction to that – that he was embarrassed to be acting in such an uncivilized way – was improvised by Ruffalo.

“I can’t remember, was this scripted?” co-director Joe Russo asked.

“I just remember one of our stunt players going ape (BLEEP) as the original Hulk,” Russo added.

“No, yeah, the idea was that Hulk was gonna do something awful and embarrass the heck out of Smart Hulk,” McFeely echoed.

“Yeah, an act.” Russo revealed. “That was an improv on the motion capture stage I believe. It used to end with just him saying, ‘I’m sort of embarrassed, it’s gratuitous’ and then he would just jump away.”

The transition into “Smart Hulk” was essentially several films in the making, with Banner and Hulk being at war with each other in one way or another since 2012’s Avengers. Still, it’s hard to deny that the five-year time jump saw a pretty drastic development in Hulk’s story, something that the creative team took into consideration.

“We sat in a room and went, ‘Let’s go one year later. No, no let’s go two. No, four! Five! Let’s make sure we have enough distance that people can change in that time,'” Joe Russo told ComicBook.com earlier this year. “And now you’ve sat with it so long that it’s become part of who you are as a person. It’s not a year later, it’s five years later. Families have started, like Robert [Downey Jr.’s Tony Stark]. This is my long-winded way of getting to the Hulk which is Banner reflects over that five year period about ‘The two of us have been fighting over this host body for years and we lost because we were fighting. It was selfish of us to fight over the host body.’ So the only natural progression forward for someone as intelligent as Banner to resolve the situation is ‘Let’s merge ourselves. Let’s quit fighting over the host body and just merge.'”

The crew is recovered from Comic-Con and we’re deep-diving into the newest must watch Amazon series and more. The Boys is officially binge-able, Once Upon a Time in Hollywood is the history lesson we all need, and the new Walking Dead series might already be dead – we’re tackling it all in episode 52 of #ComicBookNation! Make sure to subscribe now to never miss an episode!