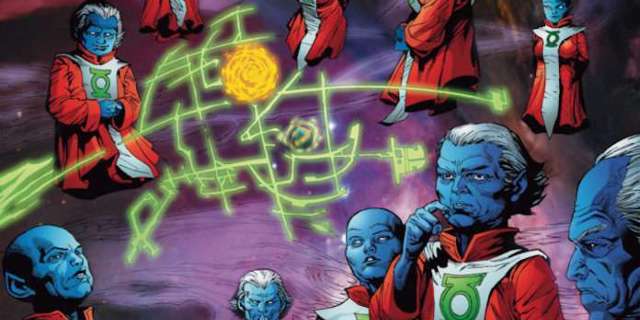 The road to the big screen was a challenging one for the Guardians of the Universe — and in particular for the flawed, doomed Guardian Appa Ali Apsa — when they made their first live-action appearance in Martin Campbell’s Green Lantern almost a decade ago. Along the way, the ancient, immortal beings who bestowed the Green Lantern Corps with their power stopped being gnome-like characters with shocks of white hair, and started to look ancient and dessicated. Recently, concept artist Jerad S.Marantz shared a pair of images from the film, that gave fans a look inside of the process of evolving the Guardians from their familiar comic book appearance to the one that eventually made it into the film.

In the final film, they were physically small, but sat on stone thrones, high in the air, and wore robes that reached the dozens or hundreds of feet from where they perched to the ground. As in the comics, they had a talent for always making poor decisions, some of which cost a lot of lives.

As we suggested above, the next image was of Appa Ali Apsa, known in the comics as the “Mad Guardian,” who in the context of the movie was someone who unsuccessfully took on Parallax in the past. His facial features and hair kind of walk a line between the final product and the version you might see in the comics, which could suggest that at an earlier point in the Guardians’ ancient history they would have been more comics-accurate. You can see the image below.

Green Lantern is available on DVD, Blu-ray, and digital in both a theatrical and director’s cut. A new Green Lantern Corps movie has been in development hell for years.