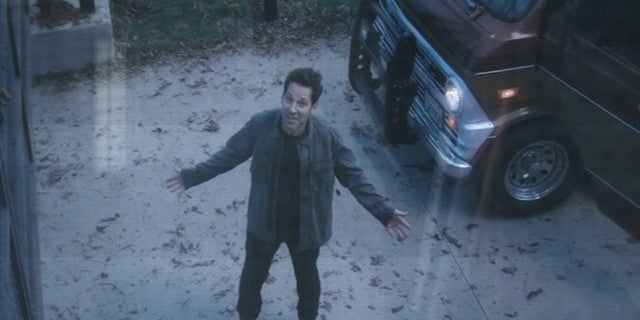 In Avengers: Endgame, the World’s Mightiest Heroes come together to save the universe from Thanos once and for all, having carried out the complex time heist to restore those lost with The Snap in Infinity War and, then, end a renewed threat by the Mad Titan, albeit with the high cost of Tony Stark’s life. No one’s questioning those heroics, but it turns out that the Avengers as a team and even Tony Stark by himself aren’t the real heroes of the Infinity Saga. There’s another hero, one fans might have overlooked and who may just appear again — the rat that got Scott Lang out of the Quantum Realm.

Avengers: Endgame is available to purchase on digital platforms today and on the director’s commentary track to the film, Joe Russo along with the film’s co-writers Christopher Markus and Stephen McFeely reveal that it’s that rat who really is the savior of the universe and now they’re giving them his due.

“And now, shortly you’re about to be introduced to the hero of the entire film,” Markus said. “The savior of the universe.”

“The hero of the Infinity Saga,” Russo added.

For those who might need a refresher, early in Endgame fans are sort of caught up to speed on what happens after Thanos’ snap in Infinity War. Tony Stark (Robert Downey Jr.) and Nebula (Karen Gillan) are rescued from certain death in space by Captain Marvel (Brie Larson), the surviving heroes try to get the Infinity Stones from Thanos to fix things but are too late as he’s destroyed them, and we get the five year jump in time. It’s that five year jump that leads viewers to San Francisco and the fate of Scott Lang/Ant-Man (Paul Rudd) who, as fans of Ant-Man of the Wasp know, was stuck in the Quantum Realm when the Snap occurred. With time having passed, the van containing the Quantum Tunnel was shuffled off to storage and, unexpectedly, a rat in the storage facility just so happened to run across the right controls to fire the Tunnel up and bring Scott back.

Scott’s return ultimately leads to the plans for the Time Heist and, thus, the sequence of events that bring back all who were lost and defeat Thanos once more. To put an even finer point on it, if the rat hadn’t triggered Scott’s retrieval from the Quantum Realm, no solution to The Snap may ever have been found, leaving the Marvel Cinematic Universe in a very different place. Of course, while the rat does end up being the ultimate hero here, that doesn’t mean he was planned to be one. According to McFeely, it really is just a pretty awesome coincidence.

“Now we have a rule in writing that, you know, sort of coincidences, you’re sort of allowed them in Act One (laughs),” McFeely aid. “A coincidence late in the movie is perhaps lazy. I’m delighted that a rat has saved the universe. But it absolutely is you know, a coincidence.”

Coincidence or not, Markus pointed out that in large-scale devastation such as what was seen in Endgame, rats really are often all that’s left so a rat saving the universe? Kind of makes sense.

“Well, when things like this happen, often rats are all that’s left,” Markus offered.

“I was going to say, there were 14 million versions of this story where the rat did not step on that button,” Russo said.

While the odds certainly weren’t in the rat’s favor, he did manage to pull off the big save, and maybe, just maybe, we’ll see him again.

“And have you seen the last of that rat?” Markus teased. “I don’t know.”

Avengers: Endgame is now available digitally ahead of a home media release on August 13th.