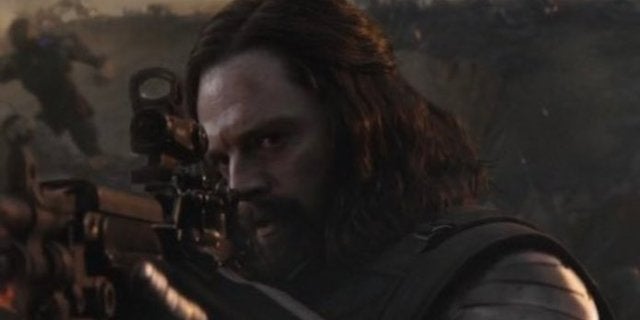 Avengers: Endgame came to a rousing climax with an all-out war between Thanos’ army, and the combined forces of the Marvel Cinematic Universe heroes. It was a fittingly epic culmination of the MCU’s Infinity Saga, and will be a sequence that Marvel fans undoubtedly watch over and over for years to come.

However, now that Avengers: Endgame is arriving on home video, and fans are getting the chance to watch the final battle sequence over and over again, they are noticing some interesting details – and one involving the hairdo of Sebastian Stan’s Bucky Barnes has some Marvel fans riled up:

bucky didn’t have a bun when they came through the portal which means this dumbass paused mid-battle to tie his hair up pic.twitter.com/Dc3hKuhFlM

@R0CKYSY0UTH – “bucky didn’t have a bun when they came through the portal which means this dumbass paused mid-battle to tie his hair up.”

As you can see above, Bucky Barnes / The Winter Soldier definitely changes hairstyle as “The Battle of Avengers Compound” unfolds. When Bucky is one of the first dusted heroes to reappear on the battlefield alongside Captain America, his signature grunge rock flowing mop of hair is flowing freely in the wind; but by the time he’s actually throwing down, and popping off shots at Outriders and Chitauri, Bucky is rocking a much more battle-ready ‘man bun’ look. The problem here is that it seems wholly out of character for someone like The Winter Soldier to arrive at a major battle only to stop and say ‘Wait, wait… let me tie my hair back first.’ A lot of fans will probably forgive the look change, though, as Sebastian Stan is one of those rare men that looks good rocking a man-bun.

In all seriousness, though, it’s clear that the hairstyle change is the result of shooting different takes of the Battle of Avengers Compound, and costume designers (and later editors) either missing the change in Stan’s look, or not being able to cut around it. The problem is that this isn’t the first time Stan’s Winter Soldier has been the subject of “controversy” over an editing error: Marvel fans noticed that Bucky’s new bionic arm (given to him by Black Panther in Avengers: Infinity War), was revealed to be a cheap sleeve cover, slipped over Stan’s arm during the shoot for the on the Infinity War poster. At this rate, Winter Soldier is causing more editing embarrassments than a coffee cup on the Game of Thrones set.