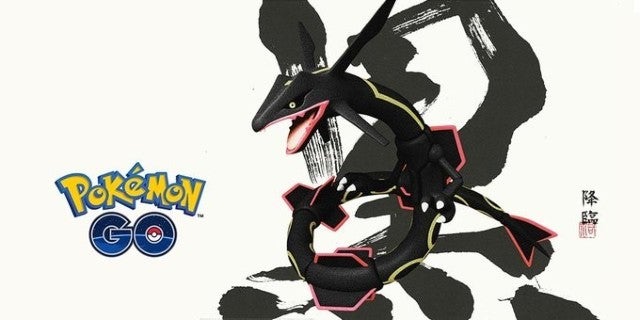 The best Shiny Pokemon is finally coming to Pokemon Go. Pokemon Go‘s Twitter accounts announced that Rayquaza, the Dragon/Flying-type Pokemon first introduced in Pokemon Ruby and Sapphire would return as the game’s next Legendary Raid Boss. What’s more – players will now have a chance of encountering the Shiny variant of Rayquaza, a black-skinned version of Rayquaza considered by many Pokemon fans to be one of the best Shiny Pokemon in the franchise. You can see what Shiny Rayquaza looks like below:

Players will initially have one month to catch Shiny Rayquaza in Pokemon Go. The Legendary Pokemon will appear in Raid Battles between July 31st and September 2nd. While Rayquaza will always appear as a non-Shiny Pokemon when appearing above gyms and in gym battles, players can find out if they’ve found a Shiny Rayquaza once they beat the Raid and face it in the encounter screen. Players can also snag Groudon and Kyogre, Rayquaza’s Legendary Pokemon counterparts, as potential rewards for completing Research Breakthroughs during the month of August.

Rayquaza is particularly weak against Ice-type attacks, so players will want to bring in tons of Ice-type attackers when battling Rayquaza. Players can also build teams with Rock-type, Dragon-type, and Fairy-type Pokemon when building their Raid team. Rayquaza is considered one of the top Pokemon in Pokemon Go, so now is the perfect time to add it to your team.

On today’s episode, we talk about Team Rocket coming to Pokemon GO, and new Pokemon mobile games like Pokemon Rumble. Plus, this week’s Pokemon fact is one that will absolutely creep you out. Make sure to subscribe now to never miss an episode!