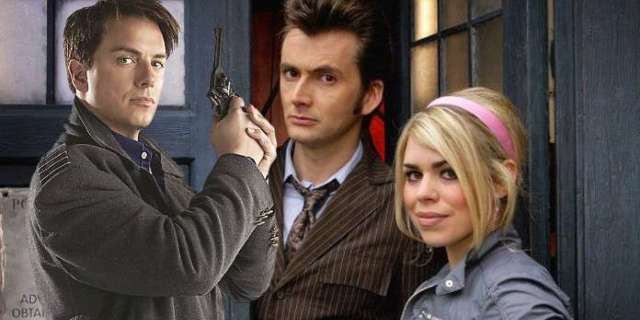 Some Doctor Who fans still look back at the era of showrunner Russell T. Davies, David Tennant as the Doctor, and Billie Piper as Rose Tyler as the series’ high point. The era also spawned spinoff shows, including Torchwood, which starred John Barrowman as Capt. Jack Harkness. While Davies, Tennant, Piper, and Barrowman all have moved on, it seems there’s still some discussion about the potential for a reunion.

Barrowman says that he Davies have discussed getting the band back together for a movie. “I can’t remember what ceremony it was,” Barrowman tells RadioTimes.com, “but I was speaking to [Davies] – he’d picked up an award for A Very English Scandal – and we said: ‘Wouldn’t it be great if we could do a Torchwood or Doctor Who movie with Jack, David, and Billie?”

This seems more like hypothetical fantasizing than anything concrete. Davies stated elsewhere that he’s unlikely to return to the Doctor Who universe. For his part, Barrowman remains proud of his time on Doctor Who and Torchwood and plans to keep carrying that torch (no pun intended).

“If I can boast, the three of us, we all call each other ‘The Golden Age’,” Barrowman says, laughing. “The three of us made such an impact that people still talk about us to this day, which is great!”

“The Golden Age,” as Barrowman puts it, came to an end in the episode “The End of Time,” which saw Tennant’s Tenth Doctor regenerate into Matt Smith’s Eleventh Doctor. Tennant did return for the Doctor Who 50th Anniversary Special, “The Day of the Doctor,” teaming up with Smith and reuniting with Piper.

Barrowman still wants to see more Torchwood as well, though he admits the executives don’t share his enthusiasm. “I’m a big advocate for [a Torchwood revival], but I always seem to hit brick walls,” he said. “I’ve been shut down many times in the past. There comes a point where one just sits back and waits to see what happens. We’ll have to wait and see!

“That’s why I always talk about Doctor Who and Captain Jack and stuff – some people think I’m being a bit of a d*** for doing it, but I don’t give a s***. There’s a market out there and sometimes I think it’s being missed!”

If you miss Tennant, Piper, and Barrowman, you should check out Big Finish’s Doctor Who audio dramas. The Tenth Doctor Adventures reunite Tennant and Piper and The Doctor and Rose, respectively, and the Torchwood serial brings back Barrowman as Capt. Jack.

Would you like to see Tennant, Piper, and Barrowman reunite for a Doctor Who movie? Let us know in the comments.