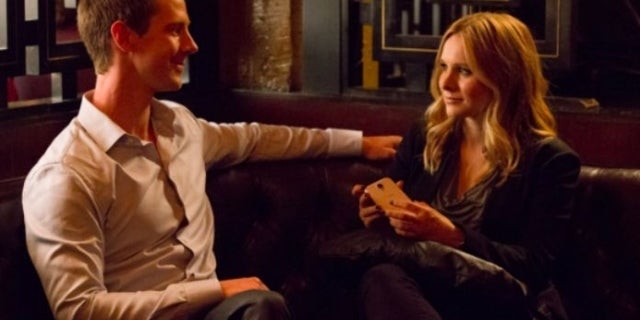 The Veronica Mars revival is finally hitting Hulu this month, and it will see the return of one of the most complicated television relationships of the 2000s: Veronica (Kristen Bell) and Logan Echolls (Jason Dohring). They had quite a roller coaster romance during the show’s run from 2004 to 2007, but she was still with Piz (Chris Lowell) when the Veronica Mars movie was released in 2014. However, her and Logan reunited during the film and are expected to be together in the revival (for now?). In the latest “Ask Ausiello” from TV Line, the site provided some hints to their relationship.

“Anything you can reveal about the status of Logan and Veronica‘s relationship in Hulu’s Veronica Mars revival?,” one fan asked.

“When we begin, Veronica, Logan and Pony are living in a 600-square-foot beachfront apartment (check out the super-cozy space!) having what is seemingly a healthy relationship,” she teased. Ausiello points out that, “I think the word you wanna focus on there is seemingly.”

Considering this is Neptune, it’s likely the relationship between Logan and Veronica will have its fair share of drama in the new season. However, in an interview back in 2016, Bell admitted that she was Team Logan.

“Prior to the movie, I think I was Team Piz, cause I thought he treated her better,” Bell shared. “But after the movie – you know, Logan really fought for her, and he was finally the underdog – instead of the troublemaker – which I have a soft spot in my heart for. So I think I”m leaning towards Team Logan, which I know will make the fans really happy.”

She added, “When the camera goes up, it adds an additional intangible. People wanted us to be together,” Bell recalled. “And I adore Jason Dohring. He”s a dear friend, and I love him, and I love his wife, and he loves my husband. We don”t have an intense sexual chemistry in real life. But on-camera even I can admit that, watching it – ‘Wow, I do want these people to kiss.’ I really do!”

New episodes of Veronica Mars will hit Hulu on July 26th, and the original series is currently streaming on the site.