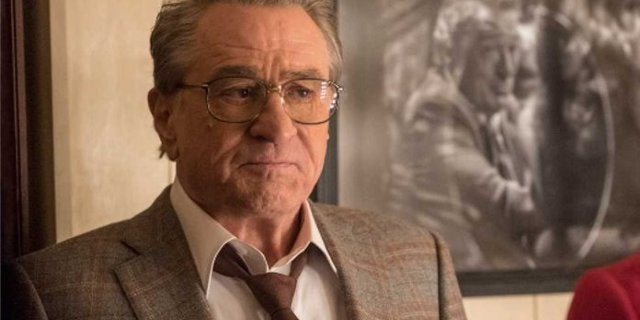 Warner Bros. has revealed a new image of Robert De Niro in Joker. The upcoming film has De Niro playing talk show host Murray Franklin. Based on the image, Franklin will get up close with Arthur Fleck, played by Joaquin Phoenix. According to director Todd Phillips, De Niro was on board after reading the script.

“Bob really loved the script,” Phillips tells Empire Magazine. “I met with him and said, ‘I’d be lying to you if I said we weren’t influenced by a lot of your movies.’ I talked with him about Taxi Driver and about The King Of Comedy, which is one of my favorite movies of all time.”

Phillips recalls there being a bomb scare on the first day of De Niro working onJoker. An explosive device was sent to the production office. “We had FBI guys showing up to search the set,” Phillips says. “And I thought, ‘Oh god, what’s he gonna be like?’ And he comes in like it’s nothing, just ready to rock, knew his shit. He’s amazing.”

Phoenix won a Golden Globe Award for his performance as Johnny Cash in Walk the Line. He’s also earned three Academy Award nominations. He brings some serious acting cred to the role of the Joker, a role that won Heath Ledger an Oscar for his work in The Dark Knight. Phoenix has spoken before about his approach to playing the iconic Batman villain.

“I wouldn’t quite classify this as like any genre,” Phoenix said during an interview. “I wouldn’t say it’s a superhero movie, or a studio movie or a … It feels unique, and I think more than anything, and probably the most important thing, is Todd seems very passionate about it and very giving, and so that’s exciting.

“I think, underneath the excitement of these films, and the size of them, there are these incredible characters that are dealing with real-life struggles. And sometimes that is uncovered and exposed, and sometimes it isn’t, and so I always felt, like, there were characters in comics that were really interesting and deserve the opportunity to be kind of . And so I think that’s what Todd sees appealing about this idea.”

Todd Phillips directs Joker, which is executive produced by Martin Scorsese. The cast includes Phoenix as Arthur Fleck, the man who will become the Joker, as well as De Niro, Zazie Beetz, Frances Conroy, and Marc Maron. Production on the film wrapped in December.

Are you excited to see Joker? Let us know in the comments. Joker opens in theaters on October 4th.