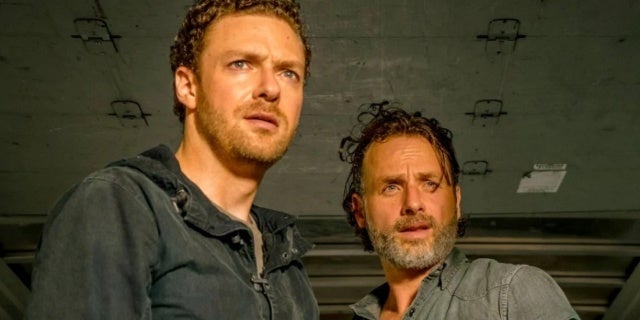 “See, I wish — I mean, obviously, the show deviates — I just wish Rick and Carl were still around,” the Aaron actor told co-star Dan Fogler on Fogler’s 4d Xperience podcast when discussing a plot twist from issue #191 of Robert Kirkman’s comic book, which ended with Rick gunned down by an assassin.

“I think everyone knows at this point if you’re a fan of the show, and they’ve announced, that there’s gonna be more with Rick,” Fogler added of Lincoln’s Rick, set to next appear in a trilogy of Walking Dead movies after surviving a bridge explosion early on in TWD Season 9.

“So you know he’s not really dead. But Carl, I think in the comic books Carl goes on to be the next hero, the next big savior of everything.”

Carl, who survived through the final issue of Kirkman’s comic book, was killed off midway through Season 8 of the show after suffering an incurable walker bite. Rick’s apparent death and subsequent disappearance on the television show is another major deviation from the books, changes Kirkman came to embrace acting as producer on the AMC series.

“It’s something that I’ve gotten used to, it happens from time to time on the show,” Kirkman said on Talking Dead when asked about losing Riggs’ Carl, a decision made under then-showrunner Scott Gimple.

“Really if anything, it just makes me more excited. I think that any time that path is not set, any time you can’t look at a comic book series and go, ‘oh, I know exactly what’s going to happen,’ it makes things a little bit more exciting.”

Ultimately, Kirkman added, such departures from the source material “just makes for a better show.”

“We’re all so inspired by the comics,” The Walking Dead showrunner Angela Kang said at PaleyFest 2019, where the writer-producer explained the show’s many deviations from Kirkman’s books.

“Kirkman is such a master of the page-turner. You read it and it’s like a juicy, juicy, just fun comic book to read. There’s so many wonderful, iconic moments in the comics. Moments you get to and just say, ‘Oh my God, I can’t believe he just did that. I have to see this on screen!’ As writers, as with any fans of the comics, we have those same responses. But with the show we have such a different array of characters and such different circumstances that it’s never going to be exactly the comic, nor should it be. It’s a different medium.”

Such circumstances include Lincoln’s desire to exit the television show, which allows Kang and her team of writers to make drastic changes capable of surprising even veteran comic book readers.

“So what’s really fun is to go, here’s that amazing moment in the comic and here’s how it made us feel,” Kang said. “Now, how do we capture that feeling, even if the way you get to it is not literally the same way that the comic book got to it?”

The Walking Dead Season 10 premieres this October on AMC.