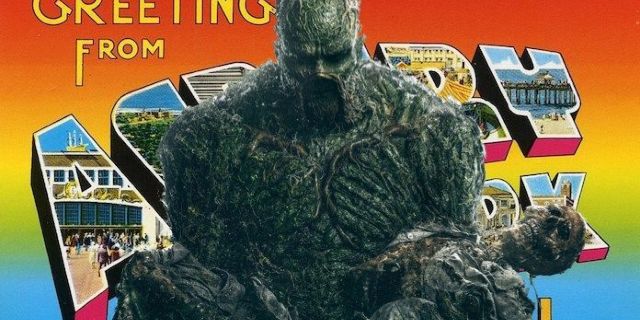 Remember yesterday, when the CBS All Access streaming service was revealed to be using a Springsteen song title as the working title for the upcoming TV series based on Stephen King’s The Stand? Well, The Boss is having quite a busy few weeks in the streaming biz. After writing that story last night, it was called to our attention that DC Universe’s Swamp Thing was releasing a new episode today titled “Drive All Night.” That the episode shares its title with a track from Springsteen’s 1980 album Nebraska could be considered a coincidence…but all evidence suggests it is almost certainly not.

The first Swamp Thing episode was titled “Pilot,” which is pretty standard practice for pilot episodes unless (as in the case of series like The West Wing and Riverdale) producers have a good reason for using an alternate title. The series’ third episode, “He Speaks,” seems to be a reference to nothing in particular, unless we are missing it. However, the show’s second and fourth episodes — titled “Worlds Apart” and “Darkness on the Edge of Town,” respectively, also share their titles with Bruce Springsteen songs (from 2002’s The Rising and 1978’s Darkness on the Edge of Town albums, respectively). A peek ahead at Wikipedia says that the sixth episode, out next Friday, will be titled “The Price You Pay,” also a song from The River.

The titles are moody enough to be episode titles on their own, and in some cases the content of the songs are tangential at beast in their similarity to the content of the Swamp Thing episodes they adorn. “Worlds Apart” is a song from Springsteen’s post-9/11 album The Rising and is told from the perspective of an American who is in love with a Middle Eastern woman. “Darkness on the Edge of Town” is a song that deals with desperation and anger, with a bit of a punk attitude — something that is reflected throughout that album, which was made after a bad breakup with his first manager.

“Darkness was my samurai record, all stripped down for fighting,” he wrote in his autobiography Born to Run. “My protagonists in these songs had to divest themselves of all that was unnecessary to survive. On Born to Run, a personal battle was engaged, but the collective war continued. On Darkness, the political implications of the lives I was writing about began to come to the fore and I searched for music that could contain them.”

“Drive All Night,” meanwhile, is as straightforward a love song as Springsteen — notoriously averse to straightforward love songs — is likely to provide. The song is about someone pledging his undying, maybe even unreasonable, devotion to his love. And “The Price You Pay” is about a lot of things, but a surface-level interpretation is that it is about someone who, exhausted by feeling stuck in a life he doesn’t want, makes the grand gesture of trying to tear down that system to give someone else the opportunity to escape it.

The Swamp Thing naming convention is an interesting one, but not unheard-of. Virtually all of the 102 episodes of the ABC/TBS sitcom Cougar Town were named after songs by Tom Petty, who is from Florida, where the series is set. While Swamp Thing is not set in Springsteen’s home state of New Jersey, he does have a lyric in his fan-favorite song “Rosalita (Come Out Tonight)” that “my machine, she’s a dud/stuck in the mud/somewhere in the swamps of jersey,” so maybe that was a partial inspiration. The CW’s Arrow, also an adaptation of a DC Comics character, names its penultimate episode every season after a Springsteen song — including “Darkness on the Edge of Town,” which was the second-to-last episode of the show’s second season.

New episodes of Swamp Thing air on Fridays on DC Universe. Bruce Springsteen’s latest album, Western Stars, was released earlier this month and is available for purchase or to stream on Spotify and Apple Music.