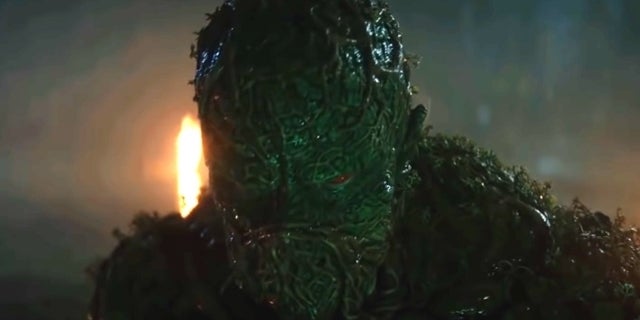 As fans well know by now, DC Universe‘s new Swamp Thing live-action series was cancelled earlier this month less than one week after the first episode debuted on the streaming service. While details on exactly why the promising series was cancelled are still a bit of a mystery, Swamp Thing‘s debut had been met with positive responses from both audiences and critics alike. Now, though, there’s chatter that the end of the Swamp Thing series might not be the last we see of the character in live-action: a movie is rumored to potentially being under consideration.

According to Bloody Disgusting, Warner Bros. may be considering developing Swamp Thing as a full-length feature film. It’s important to note that the initial report comes from We Got This Covered, but Bloody Disgusting notes that they “can confirm the validity” of the initial report. All that to say, there has been no official announcement so it’s all conjecture at this point, but what’s being rumored is that if there is a Swamp Thing feature film, it would be a horror film and that James Wan, who is series executive producer on the Swamp Thing series, would be involved.

There are a couple of other potentially interesting bits in the rumor — namely that the film wouldn’t be a continuation of the series and there would be a new cast involved — but, again, it’s just rumor. What is known is that Swamp Thing the DC Universe series will get to finish out its first and potentially only season on the streaming service. DC Universe has been releasing new episodes every week since the cancellation announcement with the final episode set for August 2. That said, fans are doing everything they can to try to save the series with the #SaveSwampThing campaign, efforts that series star Derek Mears fully supports.

“I like to go through it and – I’ve never been a part of something, anything I create or I’m a part of, I always expect 50% are going to like it, 50% are going to like it because it’s art and it’s subjective, but I haven’t been a part of something where the majority of the response is being embraced and loved by the fans,” Mears explained. “Being that I love it, I’ll go in and check some of the hashtags and see what people are saying.”

He added, “The thing that I love about everyone trying to do the save Swamp Thing hashtag is that they kind of police their own going, ‘Don’t be a jerk about it. We’re going to be polite and we’re not going to bash people, but we’re going to move forward and try to make this a movement.’ I’m like, that mindset alone just tells me the quality of people that will watch the show and makes me want to reach out or work harder to pacify them because they have the right mindset and that should be rewarded and it’s a positive one and not a destructive one and I applaud that.”

Swamp Thing is now airing its first (and possibly only) season on DC Universe with new episodes premiering every Friday.