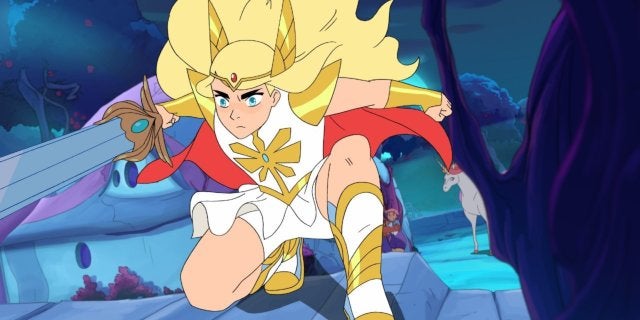 It looks like Universal Orlando Resort is officially protected by the honor of Grayskull. The resort’s Senior Director of Entertainment and Creative Development, Michael Aiello, took to social media on Sunday to share that She-Ra from She-Ra and the Princesses of Power will now be among the costumed characters that fans can meet at the park.

The news has begun to make the rounds amongst the show’s fandom, even attracting a delightful response from Princesses of Power creator Noelle Stevenson.

She-Ra and the Princesses of Power first made its debut in the fall of last year, earning a slew of critical and fan acclaim. The series reimagines the Masters of the Universe lore for a whole new generation, with some heartfelt and awesome results.

“I mean it’s amazing.” Stevenson recently told ComicBook.com of the series’ reception. “It’s been amazing seeing the feedback and the enthusiasm. I think that it’s been really nice especially to see people picking up what we set out to do and appreciating it and seeing that it was hitting in the way that we hoped it would. That’s very rewarding to see. Yeah, I mean I think we took a risk. We made some changes that were a little bit risky, and it was very validating to see people respond to that with positivity.”

The series is renewed for a third season which is set to debut in August and will see Oscar winner Geena Davis joining the cast.

“I hope this sets them up for the future seasons to get excited about some of the bigger revelations that are coming, some of the bigger character moments.” Stevenson said of Season 2. “This is the next step in these characters journeys. There are so many amazing episodes coming up, and this is the next step in all of our character’s journeys. They’re all on their way figuring out who they are. And this episode is so full of these incredible little character moments, and I really hope that people appreciate those and grow to love the characters as much as we do.”

Are you excited to see She-Ra at Universal Orlando Resort? Share your thoughts with us in the comments below!

The third season of She-Ra and the Princesses of Power will debut on Netflix on August 2nd.