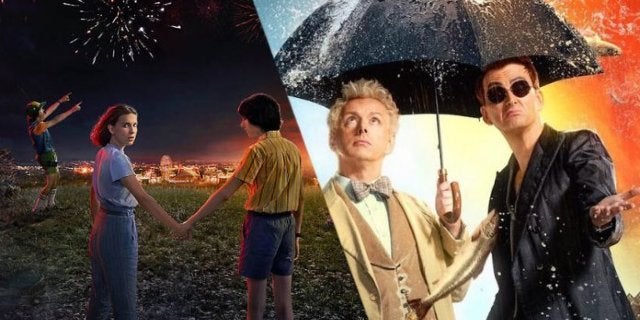 This week in “why the Internet is ridiculous,” we saw a major outcry against the new religious-themed series Good Omens, with some critical viewers banding together to petition Netflix to cancel the series. Only problem is: Good Omens doesn’t stream on Netflix, it streams on Amazon Prime.

Well, Netflix took this bit of ridiculousness in good stride, responding to the misguided petition against Good Omens with this tongue-in-cheek tweet:

ok we promise not to make any more https://t.co/TRPux36kcX

Well one good turn deserves another, as they say, and after seeing how Netflix cheekily leaned into the outcry against Good Omens, Amazon Prime decided to get in on the fun too, sending out this little gem of a tweet, which is sure to instigate a response from fans:

This all started with a Christian group called “Return to Order,” which felt that Good Omens‘ depiction of a demon (played by Doctor Who and Jessica Jones star David Tenant) was an attempt to “make satanism appear normal, light and acceptable.” The group also claimed that Good Omens “mocks God’s wisdom” by having multi-Oscar-winning actress Frances McDormand (Three Billboards) voice God in the series. While the petition page for this group has apparently been taken down, The Guardian grabbed some quotes from it, including this woeful section:

“This type of video makes light of Truth, Error, Good and Evil, and destroys the barriers of horror that society still has for the devil.”

This isn’t the first time “Return to Order” has battled pop-culture; the group has protested other religious-themed content, including the movie Office Christmas Party and another geek culture adaptation, AMC’s Preacher. Neil Gaiman, co-writer of the original Good Omens source novel wasn’t perturbed by the backlash – in fact, he seems to be enjoying it:

I love that they are going to write to Netflix to try and get #GoodOmens cancelled. Says it all really. https://t.co/8WNxCY1YmV

This is so beautiful… Promise me you won’t tell them? https://t.co/thYTOG7GBE

What’s going to be really enjoyable is checking out the small section of viewers who will try to argue why Good Omens is so in the wrong, but Stranger Things is okay. Those chat threads are going to have gymnast-level twists of logic…

Good Omens is now streaming on Amazon Prime. NOT Netflix.