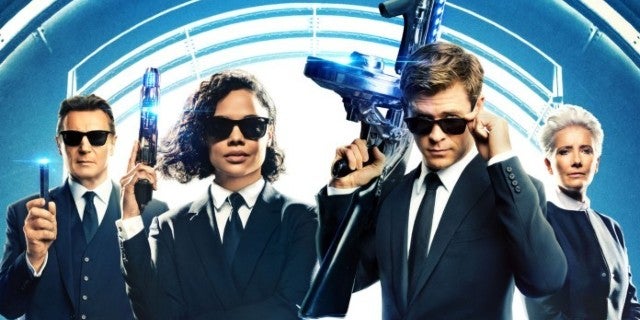 Late May tracking reported the sequel-slash-spinoff was expected to win a $40m opening weekend, still down from the $69m won by its predecessor — the Smith and Tommy Lee Jones-led Men in Black 3 — over Memorial Day weekend in 2012.

That was before critic scores were released: the $100 million-budgeted International carries a 24% approval rating on Rotten Tomatoes, second only to dead on arrival X-Men sequel Dark Phoenix (23%) as the worst of the summer among major releases.

ComicBook.com’s Charlie Ridgely praised charismatic and capable leading duo Hemsworth and Thompson — teamed a third time after Thor: Ragnarok and Avengers: Endgame — but criticized a lack of cohesion, an ineffectual story, and a clunky, wheel-spinning adventure that spans the globe.

It’s the calm before the storm as Disney-Pixar’s well-received Toy Story 4, out June 21, is projected by some for a $200m opening weekend, according to Deadline.

This latest Men in Black sequel is set in the same universe as the first three Barry Sonnenfeld-directed hits, which grossed a combined $1.6 billion worldwide, but centers on a pair of franchise newcomers: hotshot Agent H (Hemsworth) and rookie Agent M (Thompson), who must combat shapeshifting aliens infiltrating the Men in Black.

In this latest episode we go all-in on Men In Black: Internatonal, the Doctor Sleep trailer, and a whole ton of comics news! Make sure to subscribe now to never miss an episode!