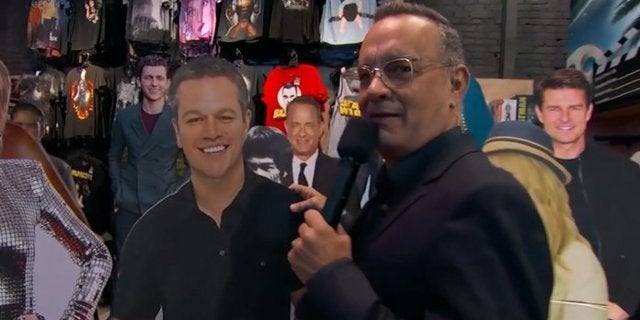 Having starred in films like Big, Forrest Gump, and voicing Woody in the Toy Story franchise, actor Tom Hanks has the reputation in Hollywood as being a nice guy. Late-night host Jimmy Kimmel hoped to challenge that perception of the actor and encouraged him to engage in all manner of disreputable behavior when Hanks was visiting Jimmy Kimmel Live, resulting in Hanks stealing a variety of objects from a nearby souvenir store. In addition to snagging a handful of souvenirs from the store, Hanks had time to adorn a cutout of Matt Damon with artwork, much to the delight of Kimmel, as seen in the video above.

Hanks had previously worked with Damon back in 1998 for Saving Private Ryan, with Hanks playing Captain Miller, a military man leading a squad to rescue Damon’s Ryan, whose three brothers had died during World War II. The pair only found one another in the film’s final act, ultimately only sharing a small number of scenes together as an intense battle comprised much of the film’s finale. Clearly Hanks didn’t mind defacing his former co-star’s cutout for the sake of the sketch.

This is only the latest entry in the long-running “feud” between Kimmel and Damon, which was birthed from Kimmel struggling with his talk show.

“We had a bad show,” Kimmel explained to NPR. “The guests were bad, and I was feeling pretty bad about myself at the end of the program. And I decided to say, for the amusement of one of our producers who was standing next to me … ‘I want to apologize to Matt Damon. We ran out of time.’ … And he got a kick out of it, the producer, so I just started doing it every night to amuse him.”

He added, “Matt Damon was just the first name that popped into my head. I was trying to think of an A-list star, and somebody we absolutely would not bump if he was on the show. … The legs on this bit are unbelievable to me. I mean, people laugh every time I say it. … Repeating the same joke every single night, you’d think eventually people would get tired of it, but they don’t.”

The rivalry has manifested in all sorts of ways, from spoof songs to appearances by Ben Affleck to even having Damon himself make appearances on the program.

Hanks can be heard in Toy Story 4, which lands in theaters on June 21st.

What did you think of the bit? Let us know in the comments below!