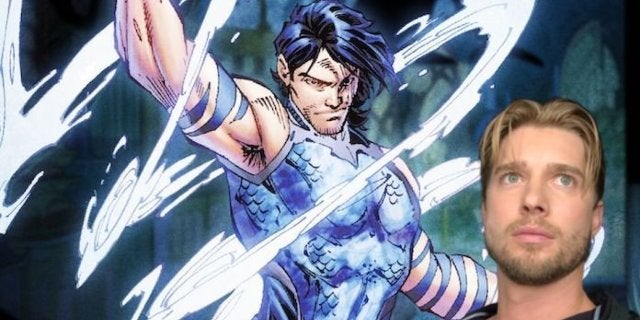 Drew Van Acker, best known for his work on Pretty Little Liars, has been cast in the role of Aqualad on Titans for DC Universe, TV Insider reports. The Atlantean named Garth has been long expected by fans to show up, and Van Acker has even been rumored for the part, but this is the first confirmation that it’s real. The actor had got fans talking about him back in May, when he shared a photo of himself on Instagram with the show’s hashtags, although he did not tease much. His very next Instagram post, a shot of the water, may have been a clue. Certainly Van Acker looks a lot more like “classic” Aquaman from the comics than Jason Momoa does — although Garth/Aqualad himself isn’t actualy blond, so that is kind of a surface (no pun intended)-level similarity.

The TV Insider report quotes the character’s official character description as “a founding member of the Titans and Aquaman’s eager sidekick” who was also born in Atlantis and is a member of the royal court who trained under Aquaman to be a protector of life in and out of the ocean. In the series, Garth “would eventually step out from the shadow of his mentor to become his own hero as a Titan along with many other former sidekicks.”

Coming off of last season’s finale, which saw Dick Grayson turning over to the dark side at the same time Conner Kent and Krypto were breaking out of Cadmus, it seems plausible that Garth will work with the remaining teens to bring Dick out of his stupor. It is clear from the first season that Dick, Donna, Hawk, Dove, and others were some version of the Titans in their past, and it seems reasonable enough that while Dick is the mentor to the younger generation of heroes, it will be his own peers and the found family of the original Titans that bring him back to himself.

Titans was already an ensemble piece last year, but this season it has expanded with a number of new DC characters — including Esai Morales as Deathstroke/Slade Wilson, Chella Man as his son Jericho, Chelsea T. Zhang as his daughter Rose (aka Ravager), Joshua Orpin as Conor Kent, and Iain Glen as Bruce Wayne — joining the cast. That sounds like a lot, but with the Wilsons likely serving as antagonists, the power upgrade of getting Superboy and Aqualad can’t hurt.

Titans season 2 is rumored to launch later this year or early 2020.