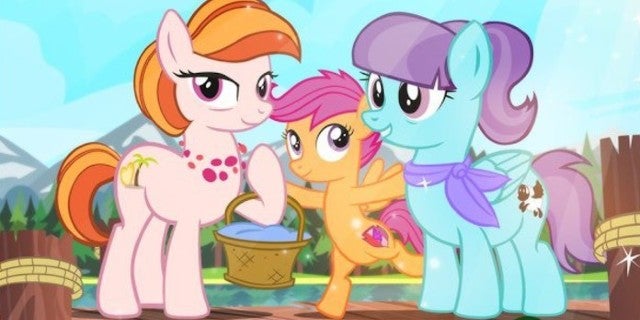 My Little Pony is joining in the growing list of iconic children’s programs making a push for more LGBTQ representation, by debuting the series’ first same-sex couple. That couple will be “Aunt Holiday and Auntie Lofty,” a lesbian couple who are caretakers of another character, Scootaloo.

People has dropped details for My Little Pony‘s big LGBTQ shift, noting that Aunt Holiday and Auntie Lofty will appear in an upcoming episode of the series My Little Pony: Friendship Is Magic. The episode will be titled “The Last Crusade”; it has already aired in Europe and will air in the US on Saturday, June 15th on Discovery Family.

Here’s what My Little Pony co-showrunner Nicle Dubuc has to say about the milestone character debut (via Buzzfeed):

“I think it’s fantastic that we can show that what truly defines a family is love — that, to me, is the core of My Little Pony.”

For co-showrunner Josh Haber, this is less a milestone than another purposed step in a specific direction:

“Diversity and representation are important for kids for so many reasons, and it’s my first priority on everything I work on,” Haber said.

Producer Michael Vogel summed it up with this:

“Nicole and I thought this was a great opportunity to organically introduce an LGBTQ couple in the series, and we asked Hasbro and they approved it. With Josh and Nicole running the final season together, it was something we all wanted to do — bring this out couple into the final season and make them ‘officially’ a part of the MLP world. My Little Pony has always been about friendship and accepting people (or ponies) that are different from you. So it just felt like something important to do.”

As stated, My Little Pony isn’t the only iconic children’s program making LGBTQ inclusion part of its initiative: Arthur had the titular character’s teacher Mr. Ratburn come out as gay, in a wedding episode that pulled the twist of Ratburn marrying his boyfriend. Major teen animated series are also taking on LGBTQ representation: Netflix’s reboots of ’80s animated series Voltron and She-Ra have both made sure to include LGBTQ characters, with Voltron making several major characters gender queer and/or gay, in major character arcs.

While this move by My Little Pony is sure to generate “controversy” (i.e., hate from certain sectors of the Internet and social media), the larger point to remember is that times have shifted, and an entire new generation of kids is growing up with both awareness of the LGBTQ community, and is subsequently much more normalized about seeing this kind of inclusion.